St Botolph’s Music Society was founded by Colin Nicholson and Rodney Tomkins in 1966. To begin with they established a choir and shortly afterwards built an orchestra to accompany them.  After celebrating the 50th anniversary of the Society in 2016 the orchestra is still going strong and performs five concerts each year, welcoming both talented local performers and renowned international soloists to present a wide ranging programme of concerts.

New members are always welcome, subject to availability of places.  The orchestra rehearses every Thursday evening during school term-time in St. Botolph’s Church. 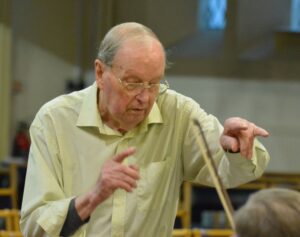 Colin Nicholson was baptised in St. Botolph’s Church where his family were regular worshipers and joined the choir as a young boy. His imagination was captured by the sound of the organ and he soon began taking lessons. Whilst still a schoolboy he became stand in organist at various local churches and after school was awarded a place at The Royal College  of Music where he studied composition under Harold Darke. Following National Service he trained as a teacher, eventually becoming head of music at Colchester Royal Grammar School.

In 1954 he became organist and choirmaster at St. Botolph’s, holding the post until 2018. With Rodney Tomkins, Colin set up the Music Society in 1966 beginning with a choir and soon after adding an orchestra to accompany them.  Colin has also composed throughout his life, producing mainly choral pieces for the church, many of which have also been included in Concerts over the years.

Colin was awarded British Empire Medal in 2012 for services to music. 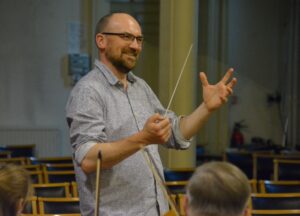 Jonathan Abbott association with St Botolph’s Music Society began in 2010 when he began assisting Colin Nicholson. By 2015 he became the orchestra’s principal conductor and under his direction the orchestra has broadened its scope and now includes more modern pieces in our concert programming.

Jonathan, who is also a trumpet player, studied at Hull University and teaches music across Suffolk and North Essex.

He also plays regularly with the Sweeting Swing Band. 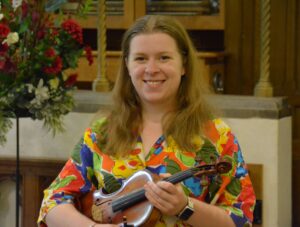 Jessica lives and teaches in Suffolk and has been playing in St Botolph’s orchestra since 2018. In 2021 she took over as leader of the orchestra.

St Botolph’s Church is situated off Queen Street in the town centre, beside the remains of St Botolph’s Priory. Colchester Town railway station is close by.

There is ample parking close to the church in the NCP, Britannia and Priory Street car parks.
The church is fully accessible. Dedicated parking in the church’s own small carpark is available on request. However, there is a number plate recognition system in force and you will be charged if you use this space without permission. Please contact the secretary to discuss specific arrangements.

Email Newsletter
If you would like to keep in touch with our concerts then please sign up to our email newsletter. Our newsletters are sent just a few times a year to let you know when a concert is coming soon. All we need is your name and email address. We will never pass you details on to any other organisation.
Click here to subscribe to our newsletter